My husband and I just celebrated our 4-year anniversary which led me to reminisce about our amazing honeymoon in…you guessed it…Costa Rica. Let’s go on this nostalgic journey together.

We started the week with a night in Tortuguero. Tortuguero is a National Park on the Caribbean side of CR. The land portions are covered with rainforest while the freshwater canals and marshy wetlands house caimans, crocodiles, manatees, jaguars, tapirs and more. Jaguars are incredibly rare to see, of course, but that never stops me from trying! Tortuguero is most famous for nesting sea turtles; several different species nest on the beaches every year.

Here are some pictures from our boat on the canals, as well as on the property of the eco-lodge we stayed at, called the Laguna Lodge. You have to take a boat to get to the lodges in Tortuguero; there is no other way there!

I apologize for the picture quality, as my camera wasn’t too spectacular. Here we are on the main boat to the eco-lodge! 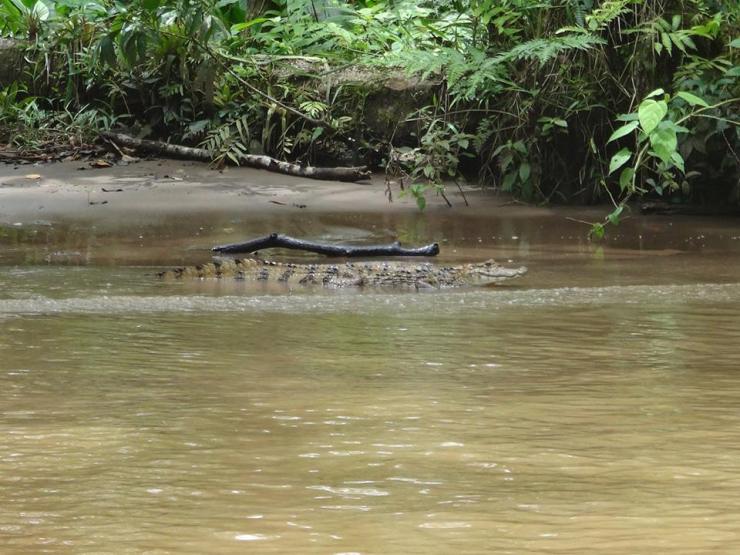 We saw several caimans on the shore as we traveled to the lodge. This guy was probably 4-5 feet long and quite beautiful! We also saw a HUGE crocodile in the water, but he swam under before I could get a picture. From the size of his head, I would guess he was 11-12 feet. He was awesome!

We passed the town of Tortuguero on the boat ride; you can take a short boat ride from the lodges to this quaint and beautiful town to meet the locals and visit some excellent hand-made shops.

Iguanas everywhere! There were dozens on the lodge property. They disappear at night to sleep then come out with the sun to warm up and hang out! They made Michael a little uneasy, but don’t worry, they don’t want to be any closer to you than you do to them! They’re fun to watch. 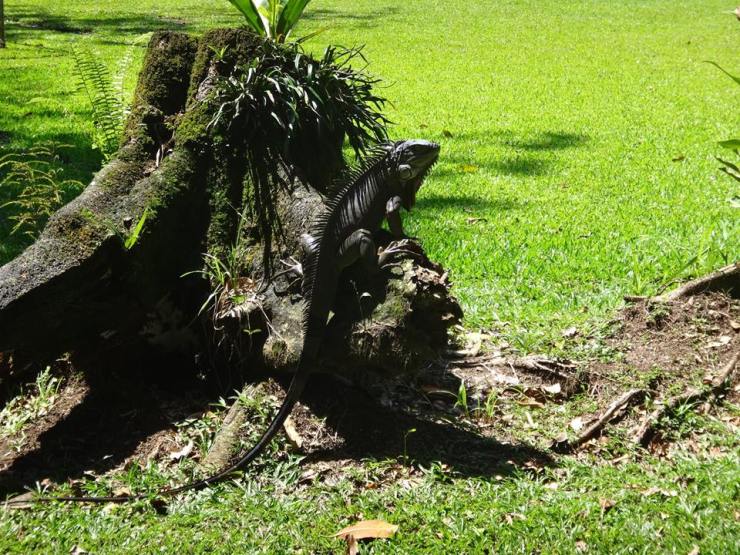 The pool area was gorgeous and very necessary; it was 90 degrees and quite humid here in late September; we are near the Equator after all! 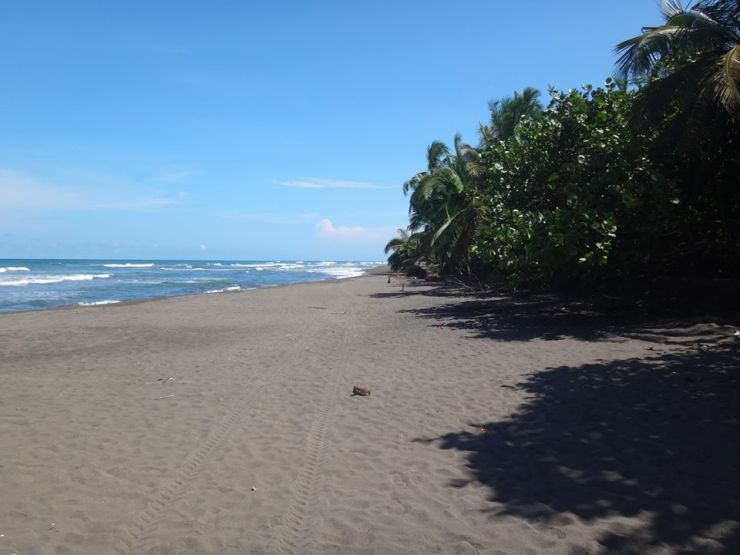 The lodge we stayed at had the canals on one side and the beach on the other! We did an excursion at night (provided by the lodge) and got to see a Green Sea Turtle come to shore and lay her eggs! It was an amazing experience that everyone should try if they visit CR. We didn’t see any babies hatch this time, but that is also a possibility when you walk the beaches at night!

This basilisk lizard did not appreciate his picture being taken. How rude of him.

The Lodge had its own tree frog garden. At night, this place was crazy! This is a red-eyed tree frog, and we saw a couple other species of tree frog as well. This was one of my favorite parts of the trip! 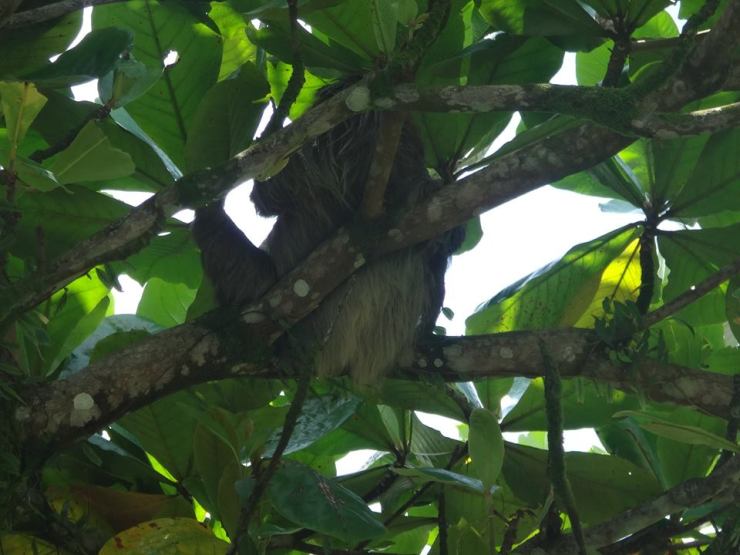 Two-Toed Sloth in the trees!

From Tortuguero, we rented a car and drove to la Fortuna in the cloud forest (central) area of Costa Rica. We stayed at another eco-lodge called the Lost Iguana. This is my favorite hotel/lodge in the WORLD. Totally serious. The lodge is nestled in the forest with spectacular views of Arenal Volcano from every room. 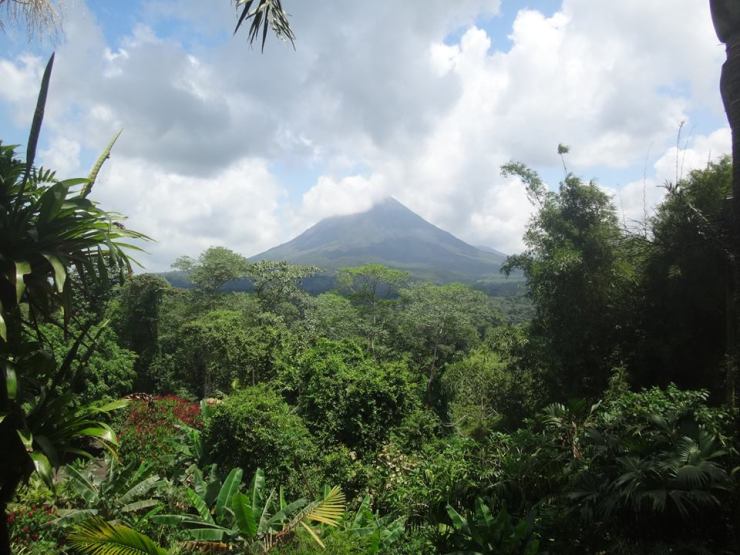 View from our balcony. Colorful birds are singing and flying, frogs are chirping and it is truly paradise.

Costa Rica only has a few species of venomous snakes; I was fortunate enough to see a Pit Viper on my trip in 2009 (sea turtle volunteer trip). I was ECSTATIC to see a coral snake on the Lost Iguana property! Coral snakes are incredibly rare to see and so beautiful! They’re also small and terrified of humans. This is the snake the “red on yellow” rhyme works for. Don’t let this little guy deter you from Costa Rica or the Lost Iguana! Michael and I were one of only two couples at this resort since we went during the low season. The resort grounds were quiet and human-free, which is probably why we came across this little guy sunning in the morning.

Another view from our balcony; this time of the lower grounds and lush gardens.

We visited Baldi Hot Springs that first night. The Arenal region is famous for its ample hot springs, and Baldi is one of the neatest ways to enjoy them! They have a dozen different pools of varying temperature from lukewarm to piping hot. Several of them have swim-up bars and one of the less-hot pools has two raging fast water slides for kids (and adults) to enjoy! It can get a bit crowded but it’s a fun way to relax for a few hours at night.

You can hike a trail around Arenal Volcano, which I absolutely recommend when visiting the area. You can get some great pictures and enjoy an easy-to-moderate level hike with spectacular views.

Now onto the adventure portion of the trip. We enjoyed both white-rafting rafting and ziplining in the Arenal area. Both of these are MUST-DOs when you visit Costa Rica. Most people relax on a beach for their honeymoon. Us? NO WAY JOSÉ. Adventure all the way!

A photographer captured some cool shots while we were rafting. It was just Michael and I and the guides, which was awesome as the entire rafting trip was catered just to us! The rapids were all class 1-3, so nothing too crazy. Neither of us fell out of the boat so I call it a success. 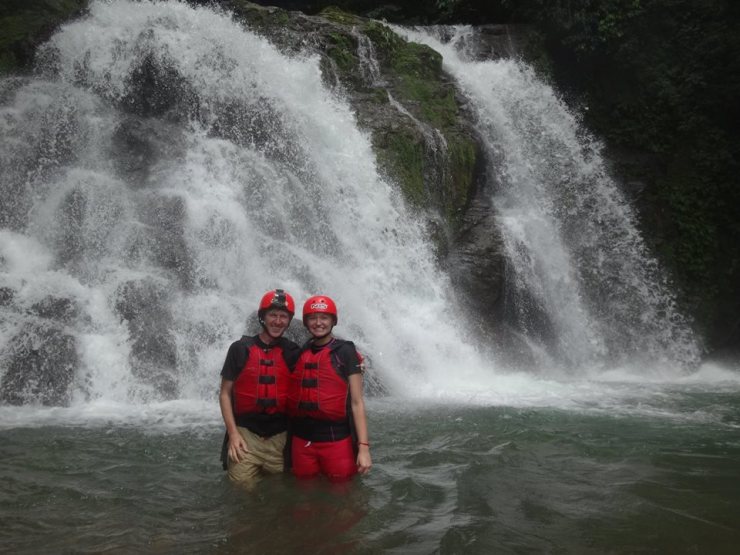 We stopped at this awesome waterfall to swim, rest for a bit and take some lovely pictures! Aren’t we just adorable?

We don’t have any pictures from the ziplining experience, but Michael wore his GoPro so we do have some amusing videos. This one is my favorite; the zipline started at 650 feet high. It’s half a mile long and lets you fly up to 60 mph. You can see the guide pretending to be a jaguar jumping up from the trees to grab me while he’s hooking me up to the line. The guides were hilarious and really fun. Watch the whole video to see me go, then to get a first-person point-of-view as Michael flies!

Our last stop on the honeymoon was to Manuel Antonio National Park. The drive was really fascinating as we wove through small, friendly towns and banana and pineapple plantations. We stayed at a gorgeous beach resort here called Arenas del Mar for our final 3 nights. Every room has its own outdoor jacuzzi on the patio and the rooms are huge. The food here was wonderful and the resort has its own private beach on the Pacific Ocean. While we did a guided trek through the national park and took surf lessons, we did have some much-needed relaxation time here on the beach and by the pool. It was the perfect place to end the honeymoon. 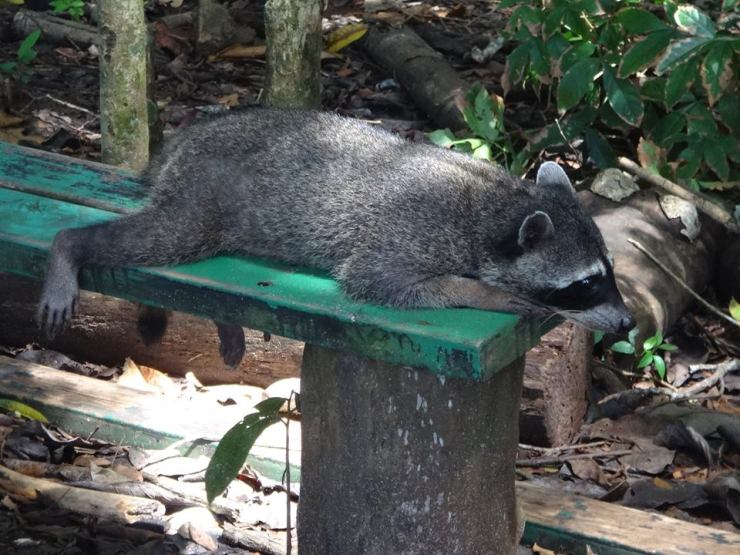 Crab-eating raccoons are everywhere in this area! They are very bold, too. Both raccoons and monkeys will rifle through your bags and steal food if you leave them unattended, so always keep bags with you! This guy was chillin’ on a bench and let me get pretty dang close. They call them “banditos,” which is fitting and what I prefer to call raccoons now in general. 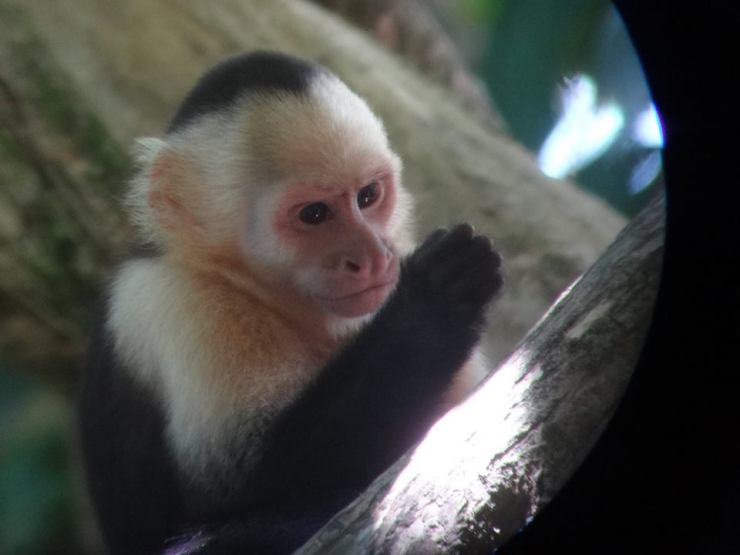 White-faced Capuchin monkeys were everywhere in the trees in the National Park. Our guide had a telescope, so I got some fantastic close-up pictures with my camera through the telescope lens. Look at their cute, expressive little faces! 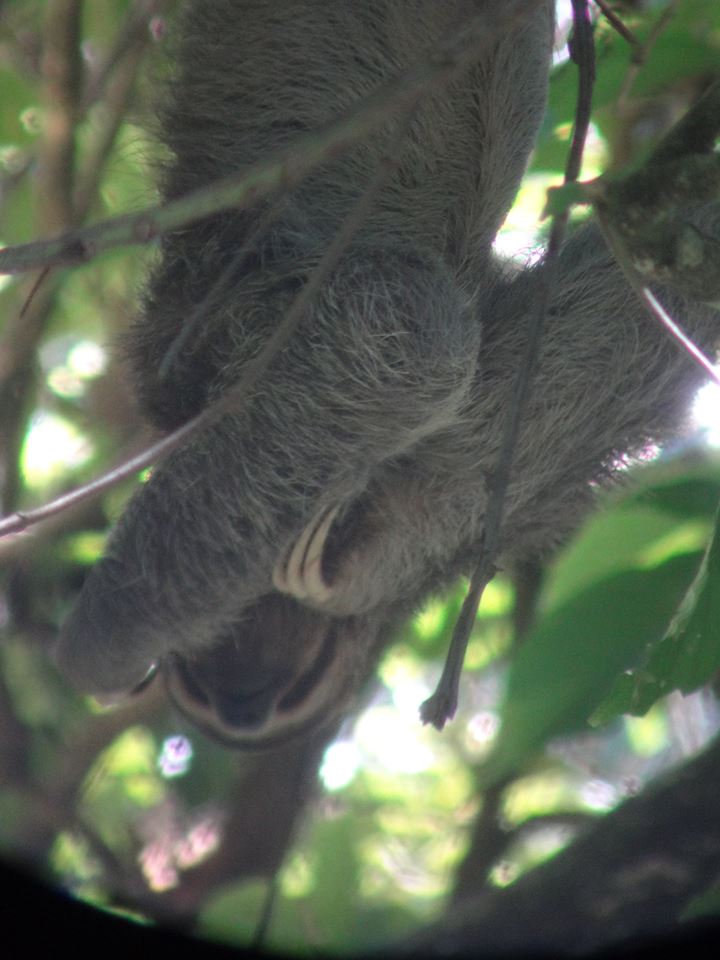 My favorite sighting in the park, a Three-Toed Sloth. We saw a few of these guys.

We did a night-walk tour with a guide at the resort that was both creepy and super cool. We saw scorpions, spiders, tree frogs and a Vinegaroon (whip scorpion)! I wore long pants tucked into my boots for this. I like creepy crawlers from a safe viewing distance, but spiders still disturb me a bit. I would do it again in a heartbeat, though!

Our last day was spent surfing in the morning and relaxing on the beach in the afternoon. I got bashed in the head with my surfboard after about an hour and a half and got a black eye, which just figures.  At least it was the last day. The private beach was lovely and covered by palm trees.  Colorful birds sing in the trees. The ocean was blue and calm. Perfection.

Costa Rica is my #1 destination in the world (so far). Flights are short and easy to the capital of San Jose, and there are several different ways to get around the country. I’ve spent a total of 5 weeks there and as a travel agent, it is one of my specialties. I would go every year if I could. If you want to plan a trip to CR, or just chat about it, please let me know! Costa Rica is for eco-travelers, adventurers, nature-lovers and beach-goers!