Welcome to Day 3 of the Disney Agent Education Program!

We started the day with a buffet breakfast at Contemporary Resort’s the Wave. It was fantastic, I highly recommend the sweet potato pancakes. We then had another 3 hours of “class” before starting site inspections. Here are some more tips and information!

After Hours are now being offered at Magic Kingdom, Hollywood Studios AND Animal Kingdom! For a separate ticket fee, you can go to the parks for a few hours after they close. Drinks and snacks are included, and wait times will be so much less than normal with a smaller group of people in the park! Tickets are limited. This is a great way to see Avatar or the new Toy Story section of Studios. There is also special entertainment during After Hours. Make sure to check it out!

If you’ve never been to Epcot during one of their famous festivals, it’s time to change that now! Epcot has festivals almost year-round now. The Flower & Garden Festival takes place from March to June and is gorgeous. The Food & Wine Festival is probably the most popular (rightfully so) and takes place from August 30th- November 12th this year. If you have a Disney Dining Plan, you can use your snack credits on drinks (alcoholic and non) and snacks at all of the international booths! A spectacular Christmas Party takes place at Epcot from November 8th to December 21st, with special guests and some REALLY cool entertainment. Make sure to hit Disney during one of these special festivals on your next trip!

Disney Springs (formerly Downtown Disney) has SO MUCH going on! If you haven’t been to Disney in a few years, you’ll barely recognize it! Disney Springs is absolutely amazing, with dozens of stores, 19 table-service restaurants, 16 quick-service restaurants, and 15 specialty restaurants/bars/eateries. A brand-new Cirque du Soleil show is in the works and the NBA Experience is opening this summer. The new gastropub, CityWorks, is also opening this summer. Also be sure to check out THE VOID when you visit Disney Springs; it’s a virtual reality walk-through adventure that will especially be fun for Star Wars fans!

The Skyliner will be opening this summer as well! If you haven’t already read about it, the Disney Skyliner is a transportation system of gondolas connecting Hollywood Studios and Epcot directly to Disney’s Art of Animation, Pop Century and Caribbean Beach Resorts! We saw the construction sites and it looks super cool! Just another incentive to stay at a Disney Resort when you visit! Now we add Sky Gondolas to boats, buses, and monorails! 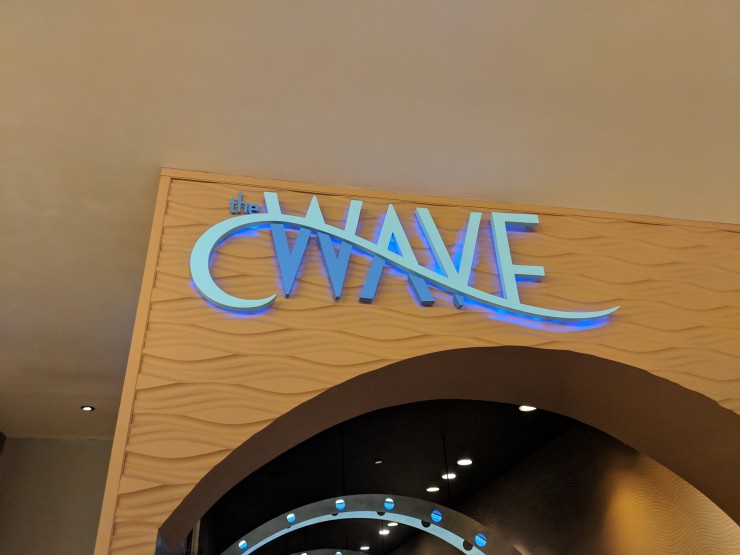 Our first stop for site inspection on Day 3 was Disney’s Art of Animation Resort. AoA is technically in the “value” category of resorts but is more of a “value-plus” resort. Kind of between value and moderate. I had never been here before and am absolutely in love with this resort! The food court here at AoA is rated one of the best of ALL Resort food courts! There are four themed areas in the resort; Cars, Finding Nemo, The Lion King, and The Little Mermaid. The Little Mermaid section contains all standard rooms, while the other 3 sections have family suites. These suites have a bedroom with one queen bed and a private bathroom. Another full bathroom is connected to the living room, which has a pull-down queen bed and a pull-down single bed. You also have a kitchenette here. These suites would be perfect for small families! We visited a room in the Finding Nemo section and it was ADORABLE. I will definitely stay here in the future. The main pool is Finding Nemo themed and precious as well. All of the pictures below are of the main lobby of AoA, the pool, outside of Cars and Finding Nemo and the inside of a Finding Nemo suite! 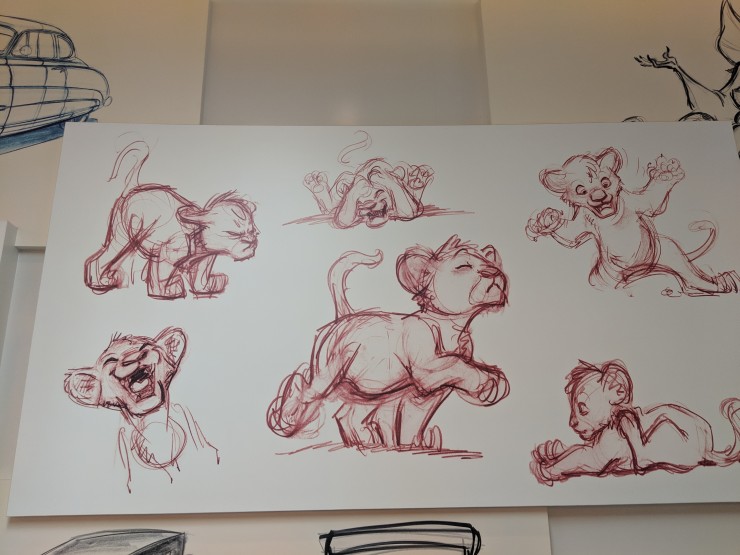 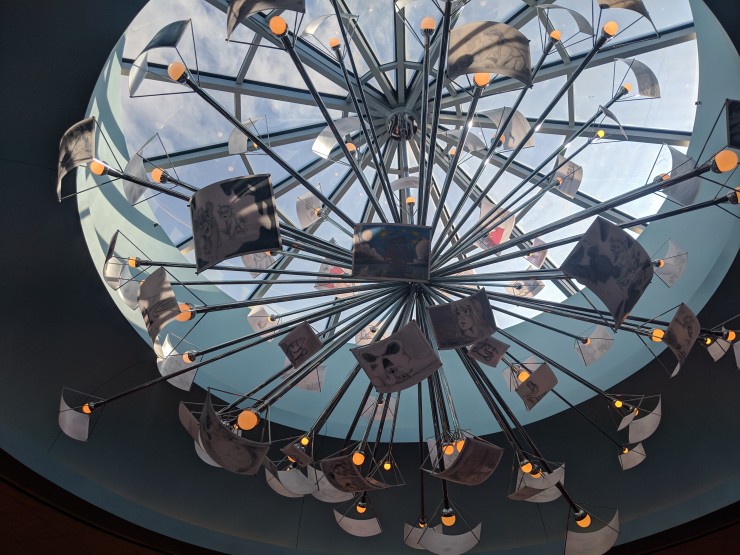 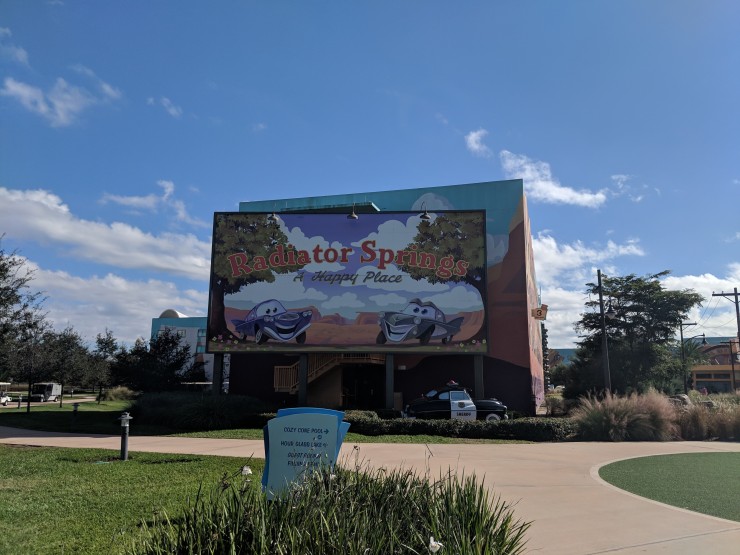 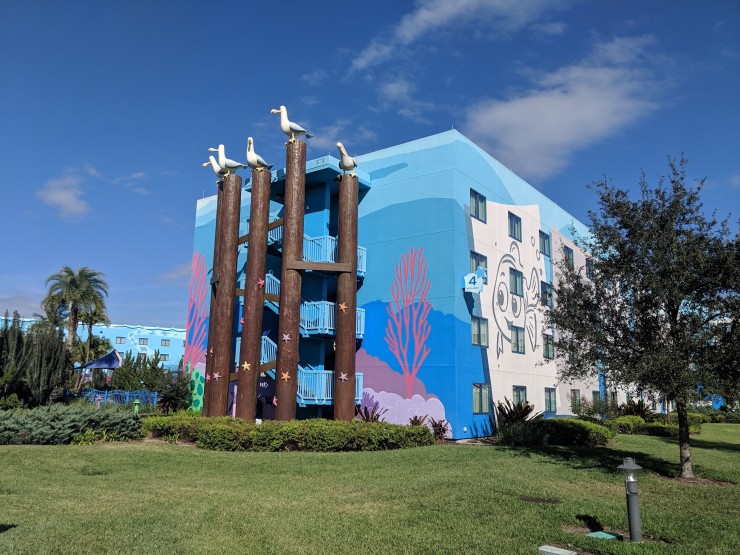 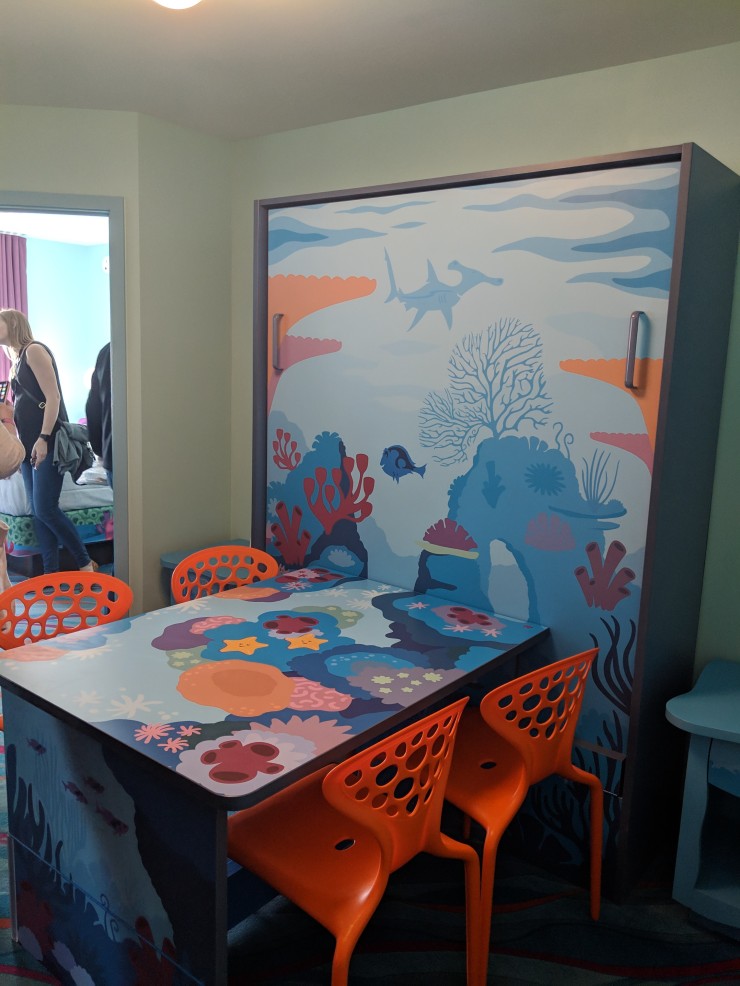 It’s a nice, short walk from AoA to Disney’s Pop Century Resort! Here you can see Pop from AoA. The Skyliner terminal is located directly in between these 2 resorts for easy access. I didn’t take many pictures at Pop, as the rooms are all typical standard rooms. Each building has a theme from a different decade with Disney-appropriate decorations! I’ve stayed at Pop before and enjoyed it; it’s a fantastic option for guests on a budget who still want to stay on Disney property. It’s a fun resort with a retro feel! 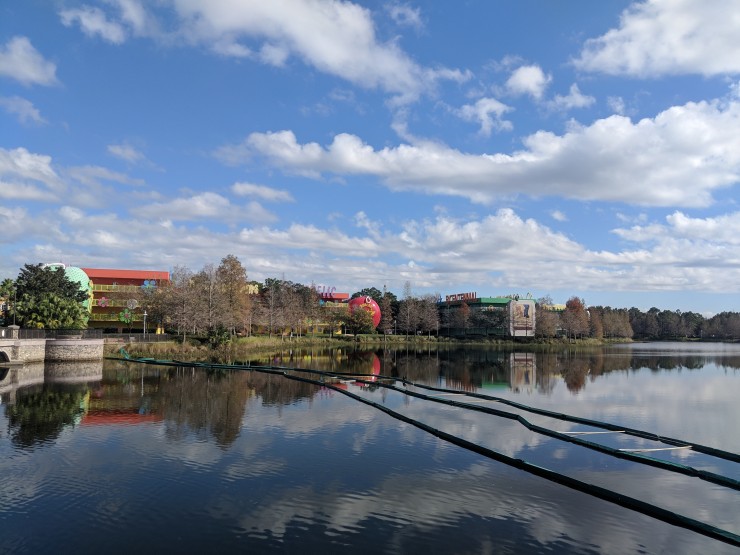 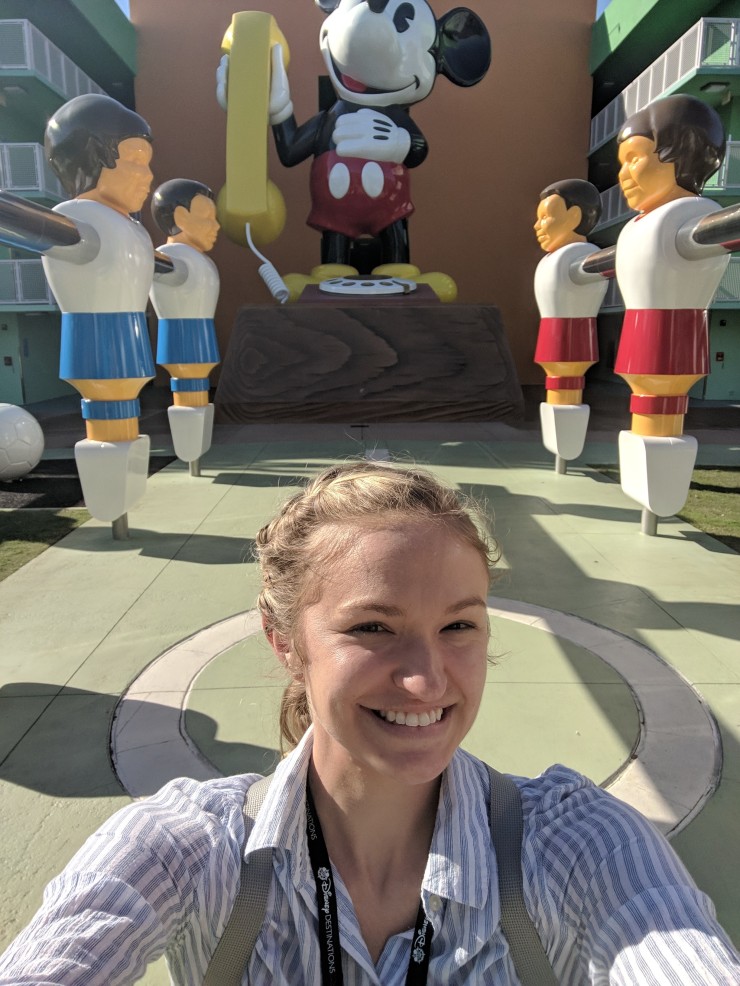 We hopped on our bus at Pop and headed to Coronado Springs. Coronado is quiet and beautiful and commonly used for conventions and business travelers. There is an authentic Latin American feel to the resort, in decoration, landscaping, and dining. Rooms are spacious and elegant. Coronado is a great resort for guests not wanting to be overwhelmed by the “Disney” character theming. 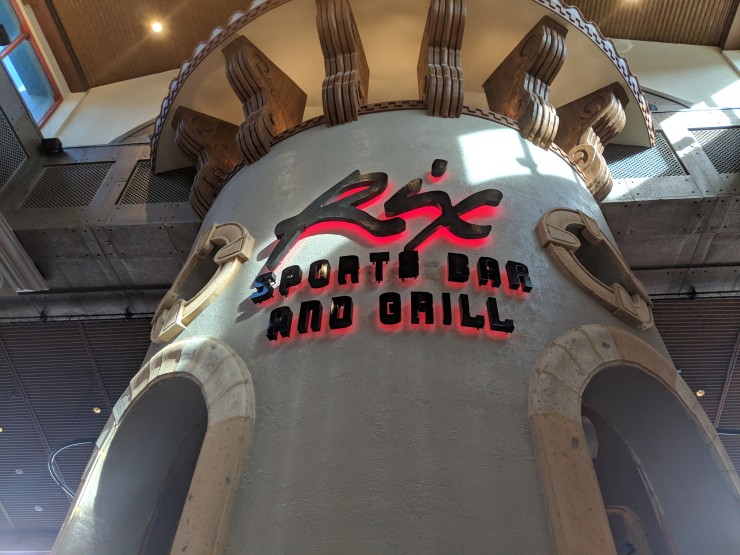 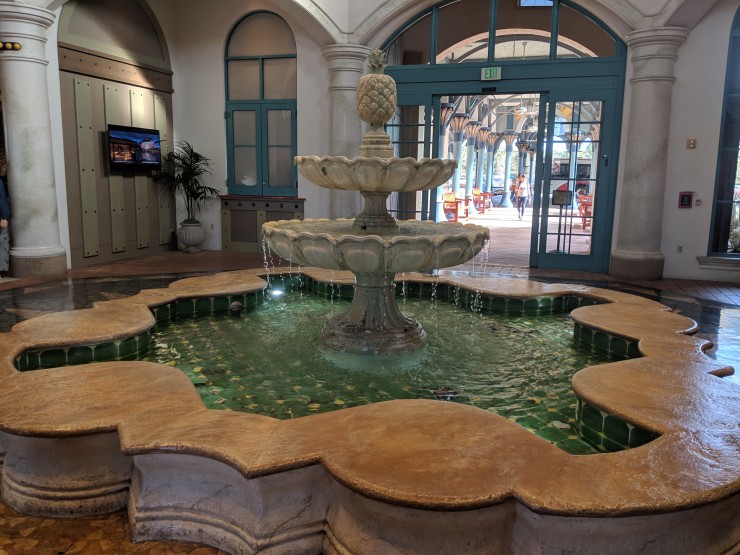 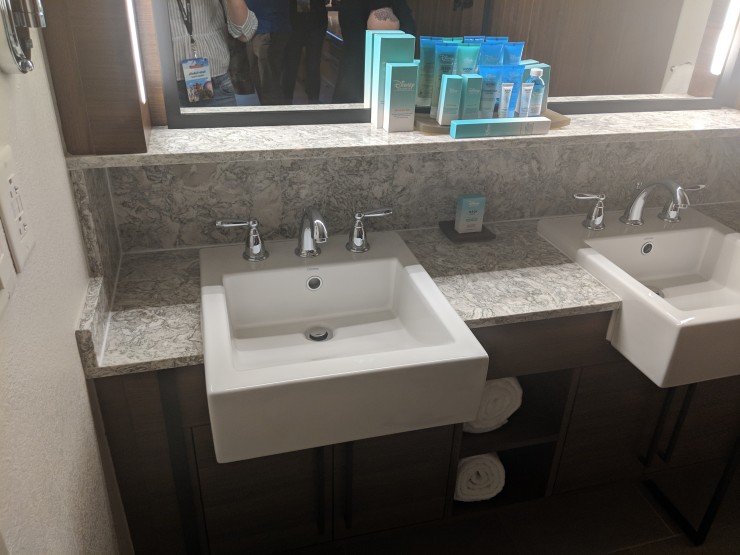 We ended out site tours at the Beach & Yacht Clubs. I am MADLY in love with these resorts now. Beach & Yacht are sister resorts (share the same property, very similar in look and feel) and are deluxe category resorts. I felt like I was in a 5-star spa resort in the Florida Keys as soon as we entered the lobby. Landscaping is amazing and the rooms are pristine. There is a sand-bottom pool only available to resort guests (they scan magic bands). These resorts are also on the water, so you have boat access to Hollywood Studios and Epcot. You can also walk to either of those parks! 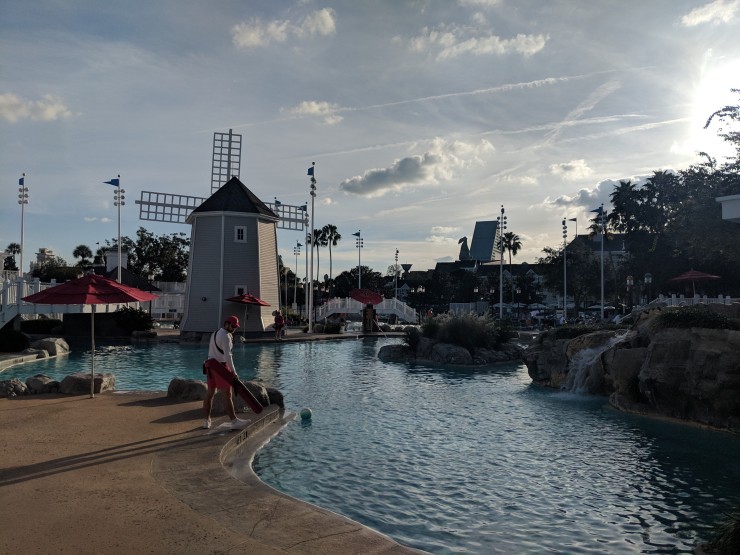 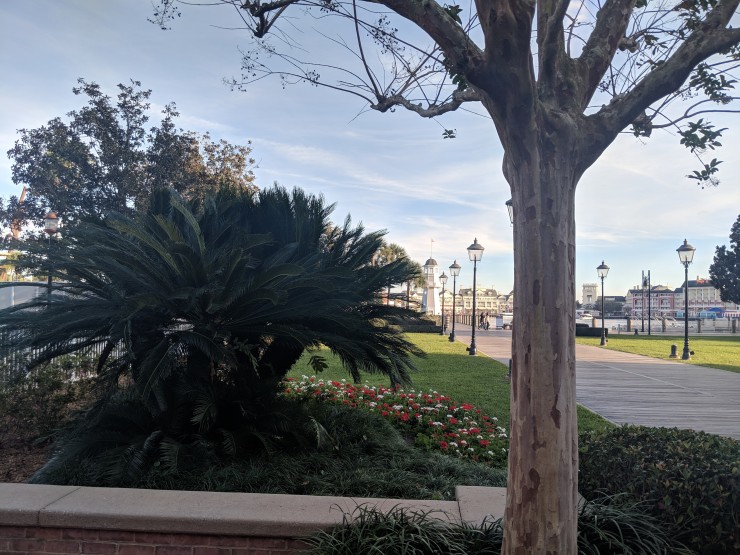 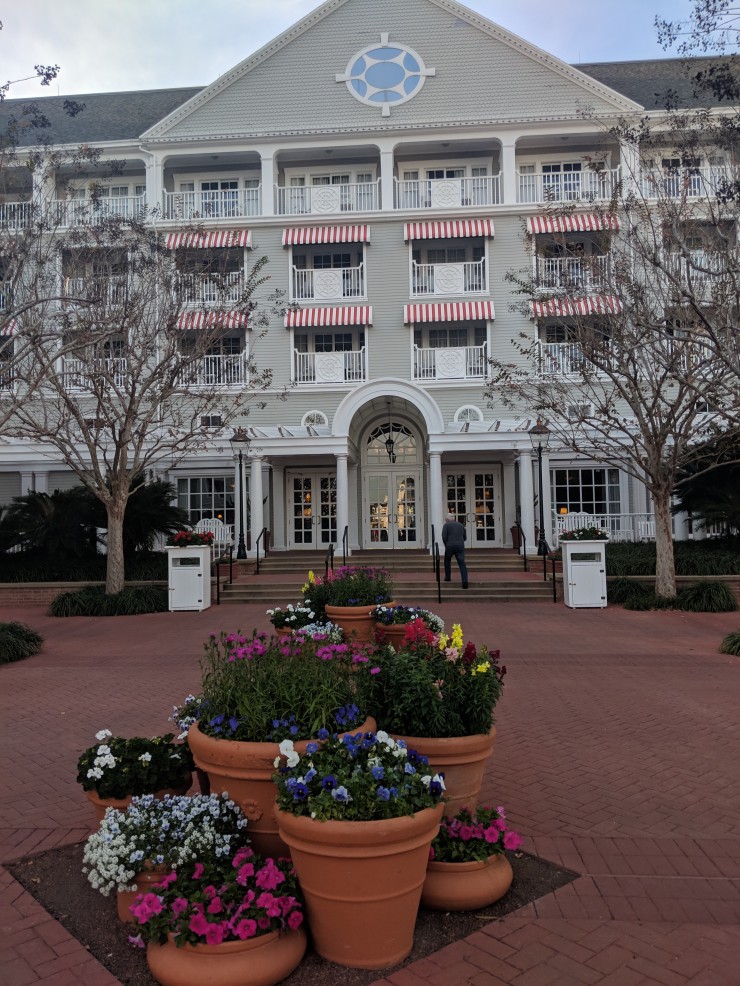 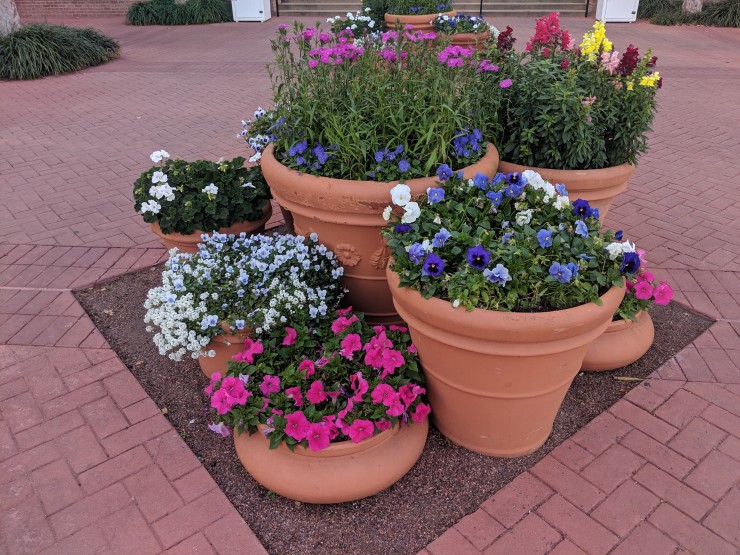 Even the trash cans are beautiful!!

We finished at Beach& Yacht around 5:30 and hopped on a boat to Hollywood Studios! It took about 10 minutes to get there, with one stop at Swan/Dolphin. We headed straight to Toy Story Land to check out the new rides first (we had 3 VIP fastpasses, BEST things ever). We rode Alien Swirling Saucers first. To be honest, my expectations were low. I was pleasantly surprised! It was a lot more fun than it looked, and I found myself laughing hysterically throughout the ride. The Aliens are talking and “oooh-ing” and it’s just adorable. I recommend it! Slinky Dog Dash is AWESOME!! We rode it twice, once when it was getting dark and once in total dark, which was the best because of all the lights on the ride. You absolutely need to ride this next time you visit, it’s so cute and fun. I took a couple of pictures in the queue so you can see the inside of the ride. 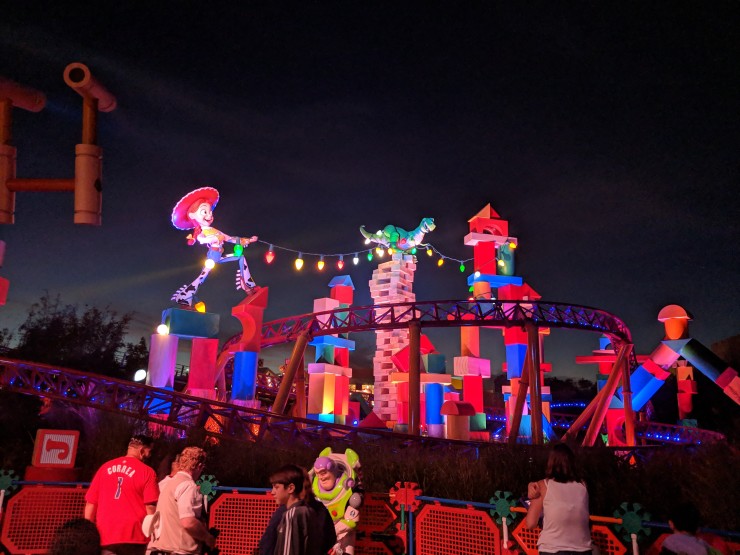 We also tried out Woody’s Lunch Box for dinner. I had the “Totchos” which are literally tater tots done nacho style, with chili, cheese, sour cream, onions, etc. Good Lord was it delicious. I tried not to picture my arteries and I inhaled the totchos.

We really only had time for Toy Story Land before park closing, but I made sure to get a Tower of Terror ride in as well (ToT is my all-time favorite Disney ride and I can’t NOT ride it)!

We ended the night by watching 2 of Hollywood Studios’ nighttime shows. First, we got to see Disney Movie Magic, followed by the Star Wars Galactic Spectacular. I had never seen either, as I am a huge Fantasmic! fan and always make sure I hit that show. Movie Magic was really cool. Star Wars was incredible; it gave me all kinds of feels. I might have teared up with the Star Wars music blasting over the speakers in sync with stunning visuals and fireworks. Even if you aren’t a huge Star Wars fan, you will enjoy this show. Both shows are best viewed from directly in front of the Chinese Grauman Theater, and we were front and center for both! Here’s a video from Movie Magic and a couple of videos from Star Wars.

Just one day left to blog! Day 4 will cover Disney’s Cruise Line and the Disney Dream, as well as Epcot. Stay tuned!